Wikipedia is among the most visited web sites on the internet, it ranks as the fifth most visited website on the internet and receives over 500 million unique visitors monthly, a huge achievement considering the website is completely ad-free and run by a non-profit charitable organization.[1] Another attractive aspect of Wikipedia is that it has always been viewed as a multi-lingual project, and currently the encyclopaedia has over 200 language versions, which vary in size and in quality.

The Arabic version of Wikipedia is currently celebrating its tenth birthday (the first edit was made on the 9th of July 2003), and although it has come a long way in that time, it still lags behind other versions, with less than 250,000 articles. This may seem like a large number, but given the number of Arabic speakers globally, the size of the Arabic Wikipedia is still relatively small. The table below compares the number of articles between select Wikipedia language versions, and the number of speakers of the respective language.

Of course this is a rudimentary analysis, as this is only focusing on the number of articles, not the quality or length of such articles, having said, the Arabic Wikipedia lags behind in other areas as well, like the total number of edits or the number of active users. 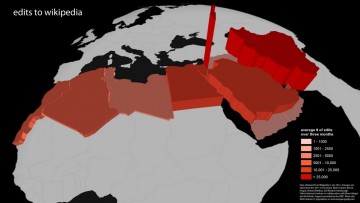 Fig 1: This map shows the large variation in edits in the MENA region (on all language versions of Wikipedia), with the height representing the number of edits. Why does the Arab region lag behind Israel and Iran? (Source)

So why does Arabic Wikipedia still lag behind? Below is list of reasons, which to varying degrees, may provide an answer.

Part of the explanation is straightforward. The Arabic world still suffers from high illiteracy rates, as well as low internet participation rates, and of course both are needed to be able to edit Wikipedia. Internet penetration rates can explain a large part of the variation in number of Wikipedia edits from any given country, and it seems that Broadband specially, has a very strong positive correlation with Wikipedia editing, and again, broadband availability is not high in most Arab countries.

Another basic reason which has been cited is the difficulty of communicating in Arabic online, partly because not all devices come with Arabic keyboards. This is led to the development of a new Arabic chat alphabet, which is a character encoding of Arabic to the Latin script and Arabic numerals (used for some of the letters that do not exist in the basic Latin script). The lack of Arabic Keyboards has meant that many young Arabs have grown to be more familiar with the Latin keyboard layout and find it hard to write on an Arabic Keyboard.

The Arab world is peculiar in that at least two varieties of Arabic exist in any given region, the classical Arabic (often called fuṣḥá) which is the written form of Arabic, and the colloquial Arabic, which is the spoken form, and differs from region to region. This phenomenon, known as Diglossia in linguistics, is one barrier to writing. As one Wikipedia editor said: “Users are not used to talking in Arabic as it’s written down, so they feel that they cannot contribute,”. [2]

This point is very much linked to the education system in the Arab world. Although Classical Arabic the primary language of instruction in primary schools in most of the Arab world, higher education is increasingly being taught in foreign languages, specifically French and English. For example, in Tunisia, high school is taught almost entirely in French, and at University level throughout the Arab world, English is the language of instruction for many subjects, especially the sciences, which are taught almost exclusively in English. The only exception to this is perhaps Syria, which still advocates a strong Arabisation policy.

The language of instruction at Higher education is particularly important, as most Wikipedia editors tend to relatively young, with the median age being 18 years of age.[3] This creates a problem for Arabic Wikipedia, as increasingly young Arabs are not studying in their mother tongue, which in turn makes it harder for them to contribute in Arabic.

This leads us onto another reason which helps explains the lack of Arabic contributors, which is the prevalence of the two main colonial era languages in the Arab world, namely French and English. 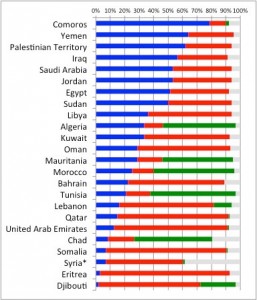 Fig 2: This chart shows which language version is visited most in Arabic countries, with blue representing Arabic, red representing English and green representing French. *Appears to be unreliable data (Source).

The figure shows that the Arabic Wikipedia is overall, a minority choice for Arabic readers, with some exceptions such as Yemen and Iraq. French is also very prevalent in former French colonies.

Figure 1 shows how the number of edits varies significantly between Middle Eastern countries, with Israel being the stand out country, followed by Iran. So do Arab countries lag behind their neighbours? Part of the explanation is National identity, as Wikipedia is in some sense a barometer of the strength of national identity.

For example, the Catalan Wikipedia has a very active community which has produced more than 400,000 articles; the Spanish Wikipedia on the other hand reached the one million article milestone earlier this year. The key difference is that 420 million people speak Spanish in the world, where as the number of Catalan speakers is under 10 million. This strong presence is a reflection of a strong Catalan identity which is aiming to promote its language, and specifically, to compete with Spanish. [4] The Arab world by contrast, is a region which has already witnessed a rise and decline in nationalism, and does not feel that its culture is marginalised or under threat. Perhaps if Arabic Wikipedia existed in the day of Nasser it would have been in a different situation.

Another factor which has helped the Catalan Wikipedia community is that it is a geographically compact community, which means organising “Wiki meet-ups” and other events are easier, and this ultimately helps the development of the encyclopaedia. In the Arab region, such meet-ups are much harder to arrange. Again this can help explain why Israel and Iran have better representation, the communities can physically meet each other frequently and develop the encyclopaedia is a coherent manner.

Another feature that Figure 1 shows is how most edits come from the Arab Mashriq (specifically Egypt and Saudi Arabia) as opposed to the Maghreb. This can be explained by the stronger colonial influences in the Maghreb region, which perhaps have diminished the status of Arabic to a certain degree.

Having said that, countries in the Arab Mashriq have also underperformed, for a number of reasons. In Syria, the government frequently blocked access to Arabic Wikipedia, Iraq has of course endured decades of war and internet access is poor. Another Arab country, Sudan, is also very poorly represented, with internet being notoriously difficult to access.[5]

The poor state of the Arabic Wikipedia has led to some initiatives which have attempted to increase the quantity of articles on the website. The first significant initiative was started by Google in 2009, and the stated aim was raising and the quantity of articles in Arabic by mobilising a group of volunteers to translate articles from the English Wikipedia, with the aid of Google Translate. Although hundreds of articles were translated, the Arabic Wikipedia community decided to halt the project after a short period, as the quality of the articles were poor, but also because it was viewed by the community as a cynical way for Google to gain a large corpora of human-translated to feed into its Translation service, which is ultimately how the service is improved.[6]

More recently, Qatar Foundation has also started a similar project, also based on translating English articles into Arabic, but this was to be done by professional translation companies, which were to be paid for their services. The latter point was a contentious one for the Arabic Wikipedia Community, as being paid for writing articles goes against the ethos of Wikipedia, which has always been written by volunteers. But quality was also an issue, and although the translations were of better quality than the Google project, the content of the articles were not relevant to the Arab reader and were poorly presented, as the translators were not familiar with the Wiki markup language.

The solution to improving the Arabic Wikipedia is simply to attempt to attract more dedicated editors to the website, as this is ultimately how other versions have flourished. Some recent initiatives have attempted to tackle this issue, and the early results seem encouraging. The Wikimedia Foundation, the body responsible for running Wikipedia, created an Arabic Language Initiative and have run a number of programmes to increase the number of editors, focussing on university students. Such initiatives are much more likely to succeed, as only an increase in human effort can improve the encyclopaedia, something that machine translations cannot replace.

The Arabic Wikipedia is currently growing at a faster rate than many other major languages, yet it is simply playing catch up. The small size of Arabic Wikipedia is part of wider problem with Arabic content online, which represents only 3% of content online.[7] With languages being increasingly represented online, it is essential all languages make a smooth transition to the internet. Wikipedia is not a traditional encyclopaedia, is it more of an “agglomerator” that collects relevant resources about a given subject into one place, and its development is essential for improving the quality and quantity of Arabic content on the internet.

[5] East Africa was the last part of the world to get fibre-optic broadband Internet, for more see here.

[6] From San Francisco to Cairo and back again: Collaborating across cultures http://ethnographymatters.net/2012/06/07/from-san-francisco-to-cairo-and-back-again-collaborating-across-cultures/

3 responses to “Arabic Wikipedia: Why it lags behind”