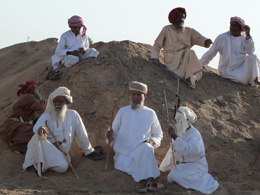 Larissa Normanton, a student at the University of Cambridge, studying Arabic and Middle Eastern studies, spent her ‘Year Abroad’ in Oman. In October 2011, at the beginning of her year in the Sultanate, Larissa paid a visit to the Wahiba Sands in the Sharqiyya region. These pictures depict a uniquely Omani cultural event called al … Continued